It's all about the heart - ESRA

It’s all about the heart

It’s all about the heart. I am an anesthesiologist, and my passion is intensive care. I am especially intrigued by haemodynamic modulation. It was easy to fall in love with bedside echocardiography and its potential to support haemodynamic manipulation. I use it whenever I can and have become increasingly confident using it as a diagnostic tool to support clinical decision making. Now I feel that approaching a patient without my ultrasound machine is like making a ‘blind assessment’. My assessment of a critically ill patent is not complete without a bedside ultrasound of the heart and lungs! Shards on trauma victim (Yemen, Al Mocha is the city)

Another of my passions is humanitarian medicine. For the last twelve years, I have spent several months working in crisis zones for organisations, including Doctors Without Borders, and the Red Cross’s International Committee. The clinical environment is always challenging with minimal resources, often only a basic point of care haemoglobin testing device and minimal radiology access (certainly no CTs!). On several occasions, I have had to bag-ventilate a patient for many hours. Over the years, I have managed a lot of trauma. My experience in Yemen was particularly memorable. I saw more trauma in one month than most intensivists see in their lifetime. In the Democratic Republic of the Congo, I helped care for a two-year-old child who had a stray bullet in his abdomen. Incredibly this was the second time this young child had been injured this way, thankfully he survived!

One piece of kit we do have is an ultrasound machine. Why is this piece of gear available in areas with otherwise minimal equipment? War zones are not just about caring for the injured – life goes on, and obstetrics is a big part of medical care in crisis areas. To manage the many obstetric challenges we meet, an ultrasound is vital. You know where I am going with this? Having even a basic ultrasound machine enables us to perform E-FAST (extended Focused Assessment with Sonography for Trauma). Without a doubt, this has had a considerable impact on our ability to save lives. I have lost count of the number of people for whom this imaging tool has made a difference. Our routine for emergencies is security (always a challenging task in such a noisy, chaotic environment), secondly, triage, and third, E-FAST. I can’t even imagine what it would have been without this ‘game of greys’ that allows us to look inside a patient’s body. I have lost count of the number of abdomens and thoraces where we have intervened based on ultrasound findings and the resultant lives saved. Equally, the number of occasions the ultrasound has shown us that intervention is not needed to save a life. I have some special reports in my personal logbook of extraordinary cases where ultrasound has made a difference and given me valuable insights to guide clinical care. In Yemen, we had a patient with a gunshot wound on the right upper abdomen. Without an ultrasound, he would have required a laparotomy (a potentially hazardous operation in this environment), but using the ultrasound, I could see where the bullet was lodged and that the intra-abdominal bleeding was minimal. We managed him conservatively, with observation and serial ultrasounds. Within a few days, he was discharged. In Mosul, I cared for a patient who had been shot through the stomach. He underwent laparotomy to fix the damage and was initially stable post-op, but then deteriorated and became anuric. Was he bleeding, was he septic? The bedside echo helped me to identify that he had gone into cardiogenic shock. We were able to provide a couple of days of inotropic support until his heart and kidneys came back into action, and he recovered well.
Alongside delivering care in crisis zones, teaching is equally important. Undergraduate and postgraduate education for doctors and nurses also suffers during times of conflict. The lives we save are a ‘reward’ that we selfishly take, but the knowledge that we leave behind is what makes the world, bit by bit, a better place to live. Helping the local team to develop their knowledge and skills is crucial. “Do you see free fluid in the abdomen?”… “Is there lung sliding?”… “Do you see a hemothorax?”… I go over and over the systematic approach of E-FAST, and when there is an opportunity, we take a look at the heart. In Yemen, the only female doctor in our trauma centre became very confident using ultrasound as a diagnostic aid after only a couple of months of bedside training. There is not one single physician anesthesiologist in the Central African Republic, so you can imagine how much you can gain by teaching some good ultrasound skills to young doctors and ensuring that they become good friends with the ultrasound. 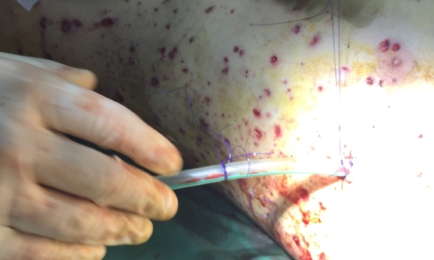 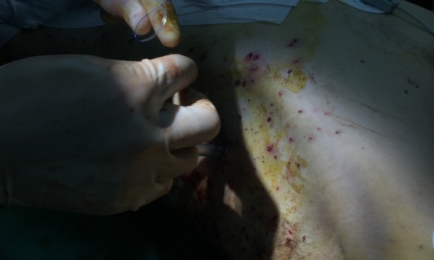 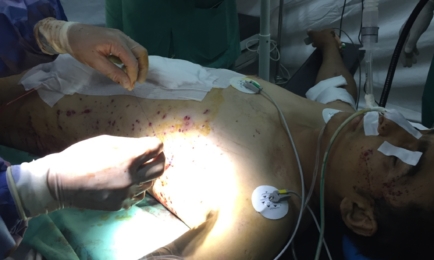 Shards on the Torax in trauma victim in Mosul, Iraq (you can see the challenge of this type of multiple injuries where you don’t know which one can be penetrating) But maybe, my most thought-provoking experience of using ultrasound was in Syria. It is difficult to describe the extent of human suffering that is happening there—frequent bombing from the army and the Islamic State’s suffocating growing pressure. We saw a lot of trauma every day, and I was doing a lot of ultrasounds. One day, one of the young Syrian nurses approached me. She told me that she had a pain in her heart. My Arabic was as good as her English, so I went through her clinical history with the help of a female translator. She told me specifically that she had seen me looking at patient hearts and that her heart was aching. With the translators’ help, and using my very basic machine with an abdominal probe, I did a bedside echo. Everything was completely normal.

It became clear to me that she was suffering from massive psychological trauma from her experiences due to the war. I scanned her heart and showed her the images, reassuring her that her heart was in a perfect condition. She felt much better, and some of her anxiety and stress faded away after my simple words. She was extremely thankful. I didn’t do much, but I guess the ultrasound helped one more person.
It’s all about the heart. 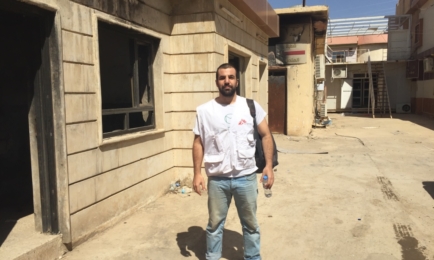 The author in Mossul, Iraque 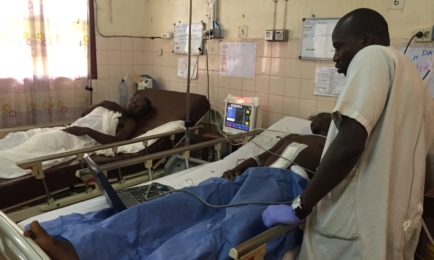