For this edition of the ESRA NL Journal club Prof Philip Peng was asked to select articles which for him were/are important, interesting or changed his clinical practice. This choice can be a general big randomized study but can also be very personal.
Dr Philip Peng does not need a lot of introduction. He is a leading expert in regional anaesthesia and a fantastic tutor and lecturer. It is an honor to share his contribution for this journal club.

“I was asked by the editor to pick one or a few articles and discuss them in this journal club. As an avid reader of different journals, I have a hard time to pick. Yet, I noticed that there are 4 randomized trials published on the Pericapsular Nerve Group (PENG) block1-4 and there is an emerging interest in this block. I would like to appraise three of them and reflect the motor block potential of this block.1-3

The first one is a pragmatic trial comparing PENG block and femoral nerve block in the peri-operative analgesia.1 It is a pragmatic trial as the authors allowed the inclusion of all types of fracture, all types of surgical options for hip fractures, both general and spinal anesthesia and even the use of intrathecal morphine in some of the patients. The distribution of the heterogenous types of fracture, surgery and anesthetic techniques was not different between the two groups. Other than the pragmatic nature, the study was well designed. The primary outcome was the maximum numeric pain score (NRS) at 4 hours in the recovery room and was superior in the PENG block group (63% vs 30% pain free in PENG vs femoral nerve block group). No difference in opioids consumption or NRS in other time interval. Regarding the motor block, absence of quadriceps strength was found in 2/30 vs 12/30 in PENG and femoral block group respectively. One of the criticisms was the heterogenicity of surgical types. The authors did a post-hoc analysis and found that the difference in NRS score between PENG and femoral nerve block groups remained for the patients with hemiarthroplasty/total arthroplasty but disappeared when only dynamic hip screw or intramedullary nails surgery were included. The superiority of the PENG over femoral nerve block is not surprising as the articular branches of hip from femoral nerve dive deep to the iliacus muscle at approximately L4-5 level and the femoral nerve block does not really contribute to the blockade of pain signal from hip joint.

Other two randomized trials are on total hip arthroplasty. The first one I would like to talk about is a randomized controlled trial (comparing PENG block with no block).2 All patients received a rich preoperative analgesic regime, then spinal anesthesia following by PENG block or no block. The surgical approach was posterior and the surgeons performed local infiltration in the wound except the capsule. Patients were managed with a multimodal analgesia approach with PCA sublingual sufentanil in the postoperative period. My criticism for the design is that the control group should be a sham block (just insert the needle) as the block was performed after the spinal anesthesia. Otherwise, the study was well-designed. The maximum NRS was superior in the first 48 hours and the difference was more in the first 12 hours. In addition, the analgesic consumption in first 2 days was much better in the PENG group, and the time for “first walk” was 10 hours earlier in the PENG block group.

The third one is a comparative trial between PENG block and suprainguinal fascia iliaca block (SIFIB) for total hip arthroplasty.3 Unlike the last two trials, the sample size was estimated not for analgesia but the incidence of quadriceps weakness (n=20 each group vs n=30 each group in the last two trials). Thus, the study was not designed primarily to detect the analgesia difference. The total dose of injectate (levobupivacaine) was kept the same but the volume varied: 20mL 0.5% vs 40mL 0.25% levobupivacaine for PENG block and SIFIB respectively. The incidence of quadriceps weakness was expectedly 90% at 3-hour post-block for SIFIB group but was 45% for PENG block group. Lateral thigh sensation and hip adduction was absent in 2 patients (10%) and 4 patients (20%) in the PENG block group at 3-bour post block. No significant difference in analgesia and opioid consumption in both groups over the 48-hour period. Because of the high incidence of motor block in SIFIB block, it is not ideal for total hip arthroplasty if early ambulation is contemplated.

I would like to make a reflection here.
PENG block was developed to target the articular branches of femoral, obturator and accessory obturator nerves by spreading in the pericapsular space in the anterior and medial capsule.5-8 The pericapsular spread should not extend to the nerve trunk of femoral and obturator nerve. The thick psoas muscle prevents the spread to the femoral nerve which is superficial to the psoas.7 On the medial side, the fascia iliaca prevents the spread to the obturator nerve.9 Then how did the PENG block in those trials result in non-negligible incidence of quadriceps weakness? The mostly likely reason is imperfect subfascial spread and the local anesthetic tracks into the psoas muscle and thus to the femoral nerve superficial to the muscle. The other plausible reason is the medial placement of needle close to the junction of psoas and pectineus muscle allows spread of injectate from deep to superficial part of psoas but it is just a postulation. 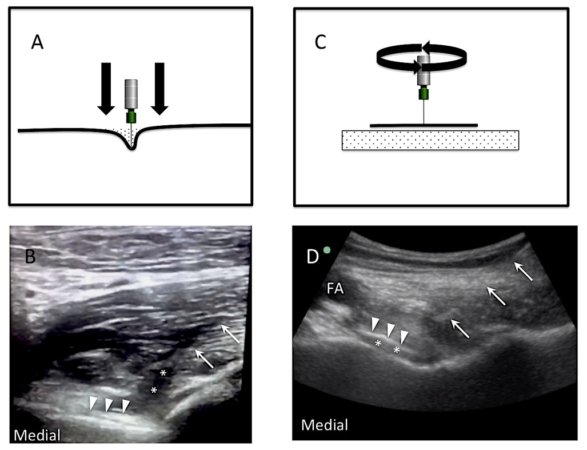 Although anesthesiologists who have performed PENG block are very careful to avoid intramuscular spread, I suspect the incidence is much higher than one expected. Many practitioners try to pierce through a fascia under ultrasound guidance should have noticed that before the needle punctures through the fascia, it “indents” the fascia first (Figure 1). In some patient with strong fascia tissue, the practitioner may have to indent more than 1cm in order to puncture the fascia. What if the fascia cannot be indented? In performing PENG block, the psoas fascia lies on the pubic bone and the ‘feel’ that the needle is on the bone does not mean the needle is actually on the bone. Pushing the needle too forcefully on the bone may jam the needle tip into the iliofemoral ligament and create a high resistance for the injection. The author for this article also performs this block for alcohol neurolysis and takes great length to make sure a fascia lift is seen by rotating the needle within the fingertips (simulating piercing action). In some young patients, it can take quite a while to see the injectate spread between the psoas fascia and pubic bone. Without seeing this, the injectate can track into the psoas muscle and spread to the femoral nerve with large volume such as 20mL. Another tip for the imperfect lift is likely related to the imperfect visualization of the anterior inferior iliac spine (AIIS) and iliopubic eminence (IPE). Quite often, I see practitioner achieving a perfect scan before insertion of needle but the scanned sonoanatomy deteriorates as soon as the needle inserted. The needle tip is likely proximal or distal to the target. One easy way is to recognise the depth of AIIS and when picture acquired for needle inserted results in significant change of depth of AIIS, it is time to reinsert the needle.